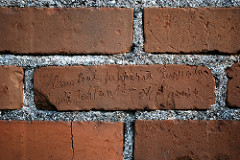 A brick is building material used to make walls, pavements and other elements in masonry construction. Traditionally, the term brick referred to unit composed of clay, but it is now used to denote any rectangular units laid in mortar. A brick can be composed of clay-bearing soil, sand and lime, or concrete materials. Bricks are produced in numerous classes, types, materials, and sizes which vary with region and time period, and are produced in bulk quantities. Two basic categories of bricks are fired and non-fired bricks.

Block is a similar term referring to a rectangular building unit composed of similar materials, but is usually larger than a brick. Lightweight bricks (also called “lightweight blocks”) are made from expanded clay aggregate.

Fired bricks are one of the longest-lasting and strongest building materials, sometimes referred to as artificial stone, and have been used since circa 5000 BC. Air-dried bricks, also known as mudbricks, have a history older than fired bricks, and have an additional ingredient of a mechanical binder such as straw.

Bricks are laid in courses and numerous patterns known as bonds, collectively known as brickwork, and may be laid in various kinds of mortar to hold the bricks together to make a durable structure. Source: Wikipedia

Where can I learn?

How to make bricks 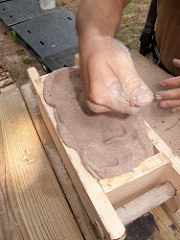 How does one make brick and blocks? What is needed in order to start a brick and block making yard?
These are some of the questions you may find asking yourself, if you haven’t we suggest you do. Have a look at some of the following points you may want to consider.

Make your own bricks from soil
How to make bricks to build a home: including the five basics of blockmaking, soil composition, and mixing the bricks.

How to make bricks from concrete
The primary use of bricks has been for wall coverings over the years, but they can be used for decorative purposes as well. Historically, the common brick has been molded from clay and fired in a kiln. But that isn’t the only way you can make brick. Another way, popular with do-it-yourself types, has been by using concrete. You can make bricks from concrete by following a few simple steps.

Stabilised soil brick making
Brick making remains an important industry in many rural and peri-urban areas, but the income it provides can be a very marginal one. Often there are large numbers of producers and the quality of bricks produced can vary greatly. Stabilised Soil Brick technology (also known as Stabilized Compressed Earth Block (SCEB)) allows producers to easily manufacture higher quality bricks and as a result receive a higher income for themselves.

Assessing the technical problems of brick production
A guide for brick makers and field workers.

Utilisation of cow dung in brickmaking
Addition of certain organic materials improves the plasticity of clay making it more workable.

How to start a brick making business

How do I start a brick making business?
This website gives an overview of what could be involved in starting your own brickmaking business from a South African perspective.

Pan Mixers South Africa
Our block and brick machines can be manually or hydraulically operated and come with varying specifications and output capabilities, depending on the size of the operation. The entry level brick machines and block machines are manufactured and designed to be used by unskilled labourers and are labour efficient making them the ideal tool for both small and medium enterprises. 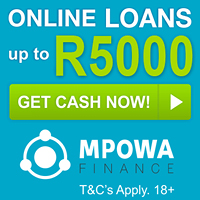 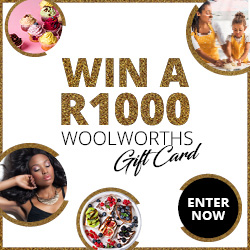